Here is a recipe that includes Italian sausages, sun-dried tomatoes, and fennel. Farfalle (pronounced far-fa-lay) translates to "butterflies". Get the onion, fennel, peppers, and garlic chopped up on a cutting board ready to toss into the skillet. Dinner in under 40 minutes! 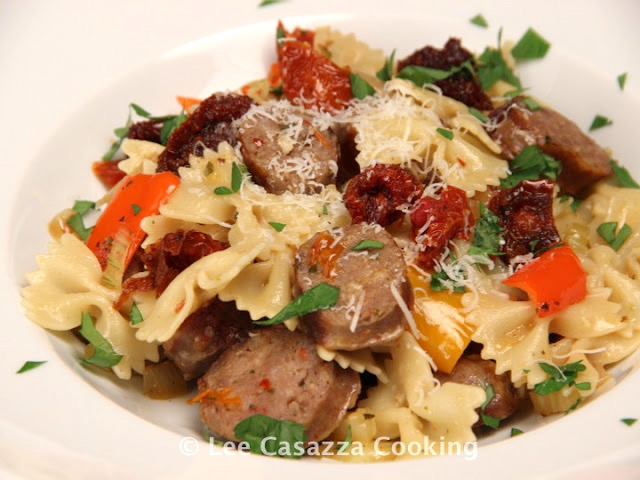 In a large skillet, heat 1 tablespoon of the oil and fry the sausages for about 20 minutes over medium-low heat until brown on all sides. I put a splatter screen over my skillet to keep most of the grease from popping out on the stove.
Remove to a cutting board and discard grease and carefully wipe out or wash out skillet.

Bring a large pot of water to a boil and add the salt.
Boil the farfalle pasta for 10 minutes, until al dente.
Save 1 cup of the pasta water and set aside.

Drain pasta and set aside.

Cut the sausages into ¼ inch circles and add to the skillet along with the sun-dried tomatoes.
Add 1 cup of the pasta water and cook another 3-4 minutes.
Spoon in the pasta and add the basil, red pepper flakes and parsley.
Toss to combine and add more pasta water, if needed.
Season to taste with salt and pepper.

Add the grated cheese and spoon pasta into 4 heated pasta bowls.
Serve with extra grated cheese at the table and a green salad...and of course a glass of vino rosso or vino bianco!