The Mediterranean diet is a heart-healthy eating plan that your whole family will enjoy. Serve the chicken with wild rice or roasted sweet potatoes and a green salad. This is a perfect autumn dinner. 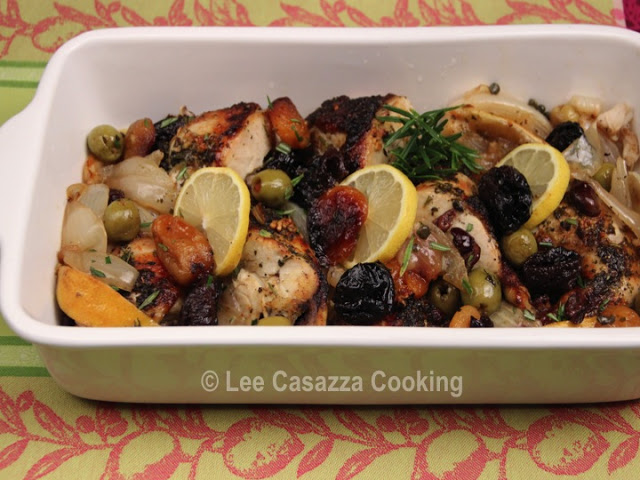 Squeeze the juice from 3 lemon wedges over the chicken.
Tuck in the rest of the wedges around the chicken.

Place the garlic, rosemary, oregano, basil, and red pepper flakes in a small bowl.
Season to taste with salt and pepper.
Mix together and evenly sprinkle over the chicken.

Drizzle the chicken with oil, pour wine around chicken, and bake for 40 minutes.
After 40 minutes, remove from oven and reduce temperature to 350 degrees F.
Sprinkle the olives, capers, onions, apricots, and prunes around the chicken.
Baste with pan juices and continue to bake for another 30 minutes, until chicken is a deep golden brown.

Transfer all of the ingredients to a warm baking pan or dish to take to the table.
Pour the pan juices over and tuck in a few lemon slices.

Syllabub is a mousse-like dessert popular in Europe in the 16th through the 19th centuries. The dessert is made with wine, cider, or brandy. I added espresso to give it an Italian flavor and chocolate...because it made it even better!! 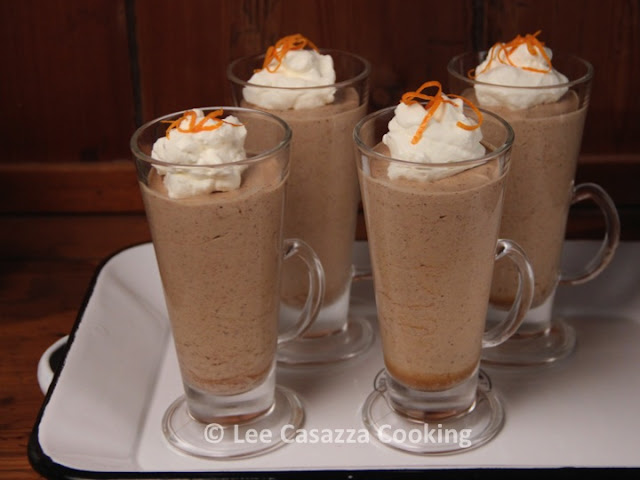 In a small bowl, combine the hot espresso, chocolate, sugar, orange zest, and brandy.
Stir well, cover with plastic wrap and let sit on the counter until cool.

Posted by Lee Casazza at 7:51 PM No comments:

Ricotta cheesecakes are easy to make and they are so very delicious. This one has a graham cracker crust on the bottom and partially up the sides. I found a box of graham cracker crumbs in the supermarket. This saved me from crushing them in my food processor. It's always nice to save a step if you can.
I also posted the ingredients to change this cheesecake into an Almond-Amaretti Cheesecake. 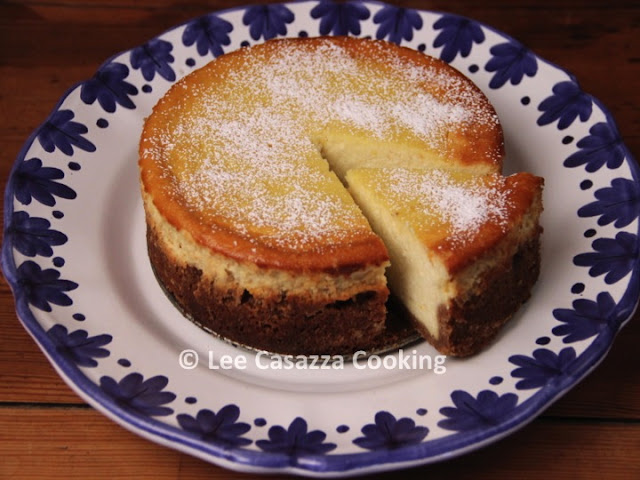 In a large bowl, mix together the ricotta and eggs.
Mix in the flour, sugar, salt, zest, juice, and vanilla extract.
Mix until completely combined.

Pour batter into pan and place on a baking sheet or pizza pan.
Place in center of the oven and bake for 1 hour 15 minutes.
Turn oven off and let cheesecake sit in the oven for another 15 to 20 minutes, until firm throughout.

Let cool on the counter, and then refrigerate for 2 hours to set.

Remove from springform pan to a cake plate and decorate with confectioners’ sugar or more grated orange zest, if desired.

Place above ingredients into the bowl of a food processor fitted with the blade and process for a few seconds.

Posted by Lee Casazza at 1:16 PM No comments:

The French have the omelette, the Spanish have the tortilla de patata, and the Italians have the frittata (frittate, plural in the Italian language). A Frittata is an egg dish that can be served for breakfast, brunch, lunch, dinner, or a midnight snack. Make it your own frittata by substituting a few of the ingredients with a few of your own favorites. Be creative! 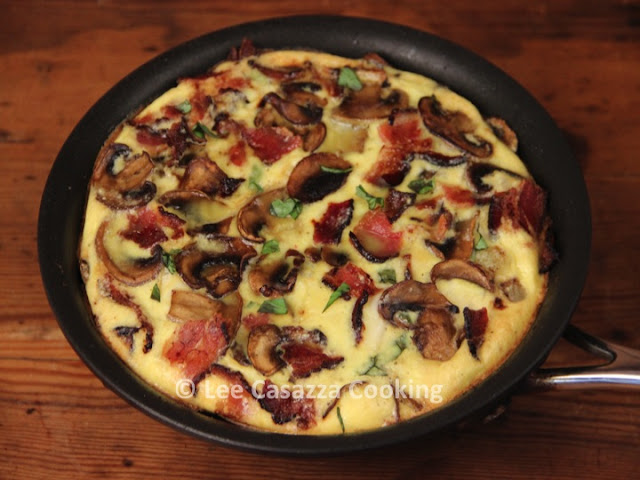 In 10 or 12-inch ovenproof non-stick skillet, cook the pancetta or bacon over medium heat until crisp.
Remove with a slotted spoon and set aside in a bowl.
Discard all but a couple of teaspoons of the grease, and add the mushrooms.
Cook over medium heat until the mushrooms are golden brown, about 12 to 15 minutes, stirring often.
Remove mushrooms to the bowl with the pancetta or bacon.
Add the potatoes to the skillet, cover, and cook, for 10 minutes, stirring a couple of times.
Remove lid, raise heat to medium, and cook potatoes another 3 to 5 minutes until golden and crisp.
Lower the heat, add the shallot and cook a couple more minutes.
Season with salt and pepper.

Meanwhile, in a large bowl, whisk the eggs, then stir in the ricotta, fontina, Parmigiano, and basil.
Season to taste with salt and pepper

Return the mushrooms and bacon to the skillet, add the butter and let melt.
Adjust heat to low and add the beaten egg mixture.

Place the skillet in the center of the oven and bake the frittata until it is golden brown, about 25 minutes.
The frittata should be mostly firm in the middle, but don't cook until center is dry.

Cut into 8 wedges and serve immediately.

Posted by Lee Casazza at 9:37 AM No comments:

In my cookbook, I have two recipes for Sicilian Gelato. Sicilians use cornstarch as a stabilizer instead of egg yolks. This gelato reminds me of the lemony flavors of the beautiful Amalfi Coast.
Turn off or stop churning your ice cream maker before it gets to the thickness of ice cream. Scoop into a container and freeze until ready to serve. Before serving, take the container of gelato out of the freezer and let sit on your counter for 15 minutes. This softens the gelato to the consistency of gelato in Italy. Gelato is ideally served with a gelato spatula instead of an ice cream scoop. 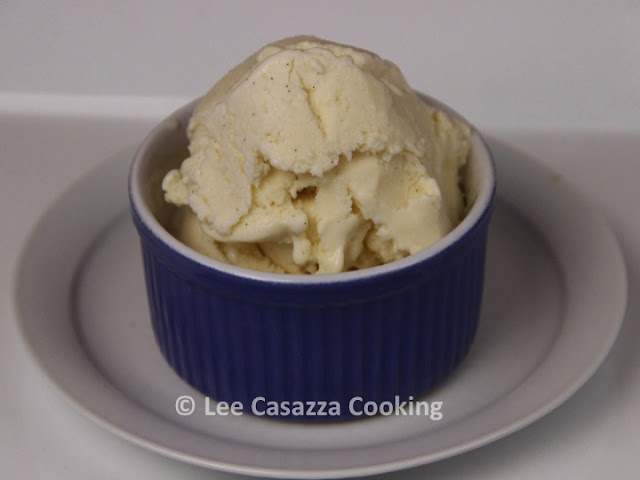 In a medium saucepan, bring 2 cups of the milk, lemon peel, and vanilla bean to a simmer.
Turn off heat and let sit.
In a small bowl, whisk the egg yolks along with the remaining 1 cup of milk and sugar.
A little at a time, stir into the hot milk mixture.
Return the pan to heat and slowly simmer, whisking until mixture thickens slightly about 3 to 5 minutes.
Let cool for 30 minutes, then pour through a fine mesh strainer into a covered container and refrigerate until completely chilled.

When cold, pour into a gelato or ice cream maker and freeze according to manufacturer’s instructions.

Another Serving Idea:
To serve as affogato "drowned in coffee".
Put a scoop of gelato in a cup or small glass. Add one or two shots of espresso and enjoy! 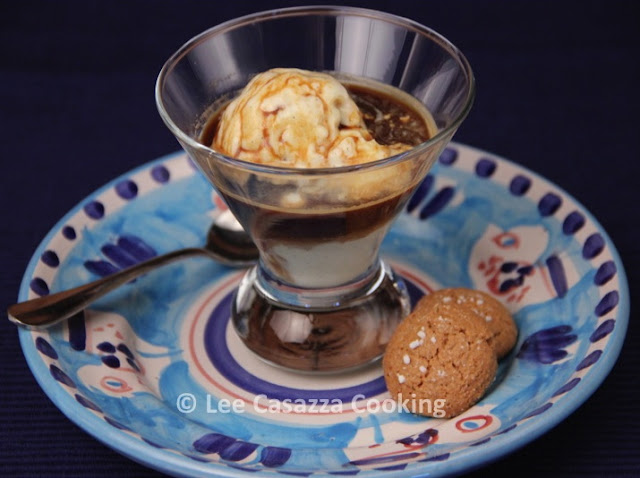 Posted by Lee Casazza at 1:36 AM No comments: