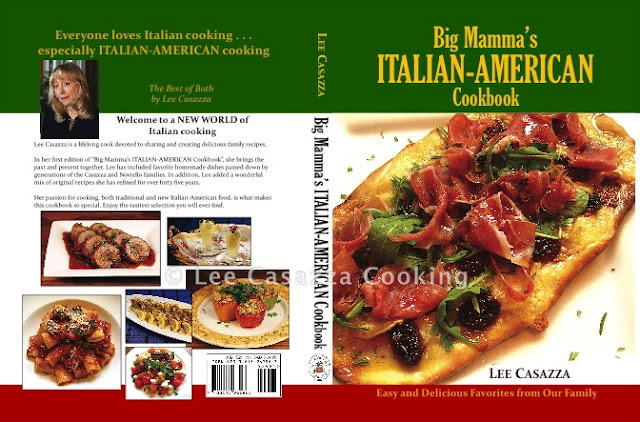 Posted by Lee Casazza at 9:57 AM No comments:

In September, gardeners have an abundance of tomatoes. Here is another delicious way to serve them. I used a combination of orange, yellow, and red tomatoes, but you can use all red tomatoes. Tomatoes are native to South and Central America. In 1519, the Spanish explorer, Hernán Cortés brought seeds back to Europe. 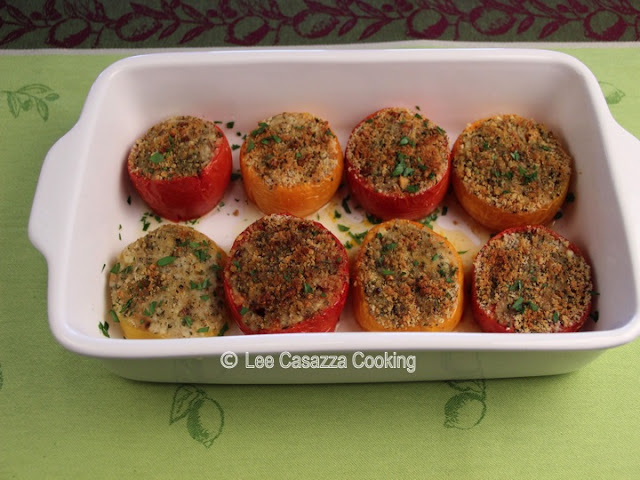 Place bread, garlic, most of the parsley, basil, thyme, rosemary, red pepper flakes, salt, pepper, and Pecorino cheese in the bowl of a food processor.
Puree until mixture is a fine ground consistency.

Cut the tops off of the tomatoes and discard.
Push out the seeds and pulp with your fingers into each pocket and discard.

Using a spoon, fill the tomatoes with the bread crumb mixture.
Place the tomatoes in a baking dish, drizzle with the extra-light olive oil.

Bake in oven for 30 minutes.
Turn on broiler and broil for another 3 to 5 minutes, or until the tops are golden brown.

Remove from oven and sprinkle with the remaining chopped parsley and drizzle with extra-virgin olive oil.

Posted by Lee Casazza at 6:22 AM No comments: 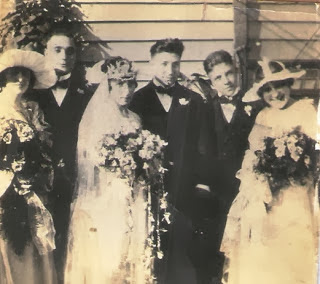 Whenever I make a Stromboli, I think about Stumpo’s Italian Grill in Cape May, NJ. Stumpo’s has since closed but a family member, Rosemary Stumpo, still runs a B&B in Cape May, called the Delsea. We stayed there several times in the 1980s.
Stromboli originated in the Philadelphia area and is filled with meats, peppers, mozzarella, provolone, and Parmigiano cheeses.
Tomato sauce should be in the stuffing and on the side.
Calzone originated in Naples, Italy and is filled with meats and ricotta cheese. Tomato sauce is served on the side.

In a large bowl, combine the water and yeast.
Set aside until the mixture is foamy, about 10 minutes.
Add the oil and half of the flour and stir to combine.
Add the rest of the flour and salt and mix well.
Turn out onto a floured surface and knead until smooth.
Place the dough in a large oiled bowl, turning over to oil the top.
Cover with plastic wrap and set aside in a warm place until doubled in size, about 1½ hours.
Punch down the dough and place on a 13-by-18-inch baking sheet.
Let rest for 10 minutes, then roll and stretch the dough to cover the entire baking sheet.

While the dough is resting, cook the sausage in a little extra-light olive oil until no longer pink.
Add the peppers and onion and slowly cook until soft, about 10 minutes.
Spread about ½ cup of the tomato sauce on the dough, leaving a 1-inch border.
Add the sausage mixture and layer on the provolone, ham, salami, and mozzarella.
Sprinkle with Parmigiano.
Roll the dough into a long cylinder, with the seam on the bottom.
Let rest on the baking sheet for about 20 minutes, to rise.

Cut a few slits on the top and sprinkle with cheese.
Bake until golden on top, about 20 to 25 minutes.
Remove from oven and let rest for 5 minutes.
Slice thickly and serve with some tomato sauce on the side.

Posted by Lee Casazza at 3:01 AM No comments: