Cacio e Pepe is a quick and super easy Roman pasta dish. You can make this dinner in under 30 minutes. Italian-Americans usually add butter to this recipe but Italians in Italy would never do this. The creaminess comes from the Pecorino Romano cheese and some of the pasta cooking water. Cacio e Pepe translates to ‘cheese and pepper’. If you want to add butter, add 2 tablespoons to the sauce at the end. I used the traditional bucatini pasta for this dish, which is a hollow version of spaghetti; it’s like a straw with a tiny hole. The name comes from the Italian word buco, meaning hole. 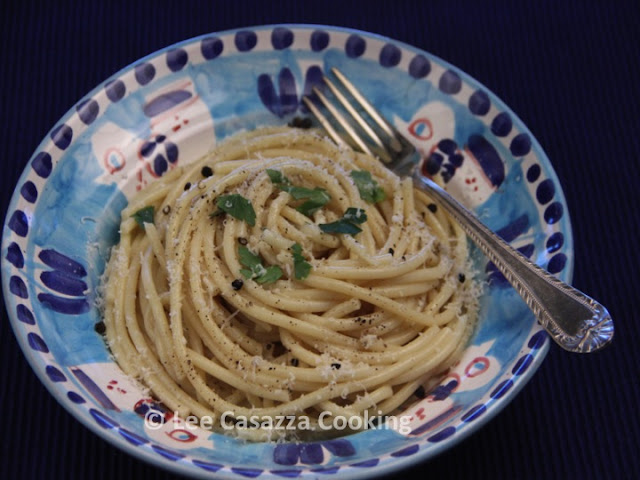 Pour grated cheese and black pepper into a small bowl and set aside.

Bring a large pot of water to a boil, then add the salt.
Boil pasta until al dente (bucatini takes about 10 to 11 minutes and spaghetti takes 7 to 8 minutes).

In a large skillet, large enough to hold the pasta, pour in the Pecorino and black pepper.
When pasta is finished cooking to al dente, reserve 2 cups of the pasta cooking water.
Drain pasta in a colander and add 1 cup of the pasta water to the skillet with the cheese and black pepper.
Over medium-low heat, mix thoroughly with a wooden spoon to make a creamy sauce.
Add a little more pasta water if sauce seems to dry.
Add pasta the skillet and toss with tongs to completely combine and heat through.

Divide between two warm pasta bowls and serve with additional cheese, if desired.

Posted by Lee Casazza at 4:08 AM No comments:

Limoncello tiramisù is a dessert popular on the Amalfi Coast where the largest lemons you have ever seen, are grown. Normally this dessert is made to serve 8 to 10 people, but this is a smaller version and serves 4 to 6. Make your whipped egg whites and custard (zabaglione) in the early morning to let them have time to chill. Your finished tiramisù should chill at least 8 hours before serving. 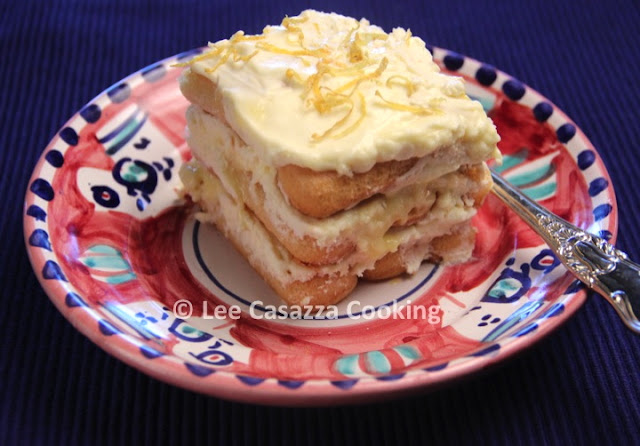 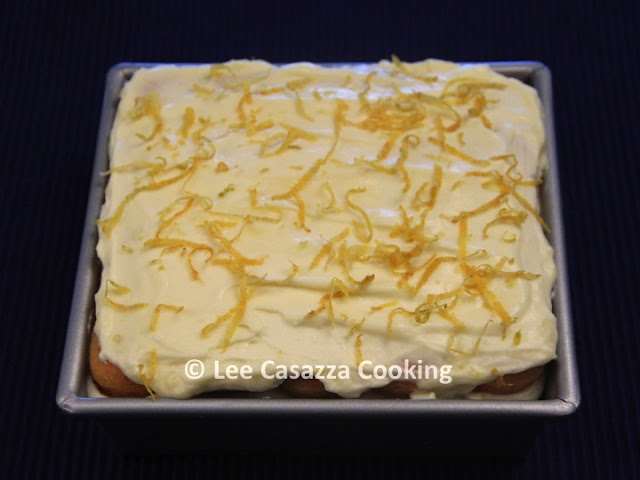 Heat water in a saucepan that a stainless steel bowl can be set over without touching the water.
Off the heat and using a hand-held mixer, beat the egg yolks and sugar in the bowl until mixture is creamy. Set the bowl over the saucepan of barely simmering water and beat until the mixture is thick, light in color, and creamy, about 3 minutes.
You just want to kill any bacteria that may be in the raw egg yolks.
Add the mascarpone and beat until completely combined.
Add the limoncello and beat a couple more minutes. Stir in the lemon zest, cover and refrigerate until cool.

While the egg whites and custard are cooling in the refrigerator, pour the sugar and boiling water into a shallow bowl. Stir to dissolve the sugar then add the limoncello and lemon juice.

When ready to assemble, use a square or rectangle pan. I used a square 8-inch pan.
Quickly dip the ladyfingers into the bowl with the Limoncello Syrup, on both sides. Do not let them soak in the liquid. Place in the bottom of the pan to make a layer. Mine took 8 lady fingers.

Spread one third of the custard mixture over the ladyfingers.
Repeat two more times.

Cover and refrigerate at least 8 hours.

Sprinkle with the coarsely grated lemon zest before serving.

Polenta is definitely an Italian comfort food. Adding delicious and spicy shrimp in a tomato sauce is sure to please anyone who loves shrimp and polenta! This meal comes together in under 30 minutes. 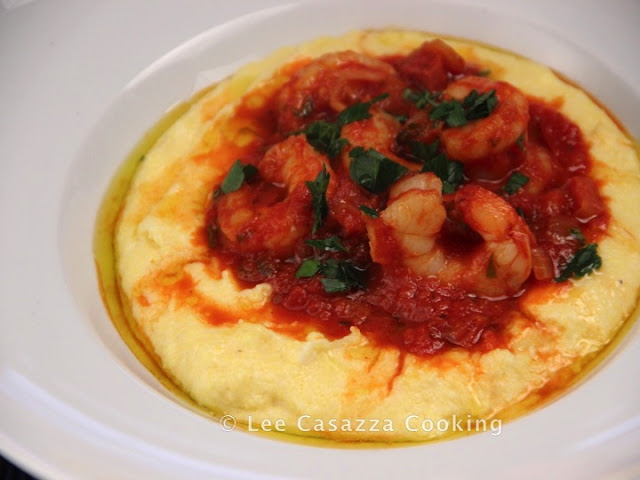 In a large skillet that will hold the shrimp and sauce, add the oil and cook shrimp over medium-high heat for 2 minutes.
Remove with a slotted spoon to a bowl and set aside.

In the same skillet, add the pancetta and cook until crisp.
Reduce heat to medium, add the onion and sauté 5 minutes.
Add the garlic and red pepper flakes and sauté another minute.

Pour the tomatoes into a large bowl and hand-crush them, removing any hard center cores.
Alternatively, use an immersion blender to chop the tomatoes.
Add the tomatoes, basil, and wine to the skillet.
Season to taste with salt and pepper and simmer for 20 minutes.

Meanwhile, while the sauce is simmering, make the polenta

In a medium saucepan, heat the chicken broth and milk.
Add the salt and slowly stir in cornmeal and cook while stirring constantly until mixture thickens, about 10 minutes.  Stir in butter, cheese, cover and keep warm.

After sauce has been simmering 20 minutes, add the shrimp and heat through for no more than 2 minutes.

Spoon on some of the shrimp and sauce, drizzle with extra-virgin olive oil, and sprinkle with chopped parsley.