In Italy, this dish is called Pollo al Marsala Lombardo (Chicken Marsala) and made without cheese. With the addition of cheese and green onions, it is an Italian-American version. The capital of Lombardia is Milano (Milan). The regional cuisine is based on butter, lard, pork, and veal.

If you want to serve this for company, prepare it in the morning, refrigerate, and let sit on your counter for 30 minutes before baking.
Serve with risotto, or pasta, or even roasted potatoes and a green salad. 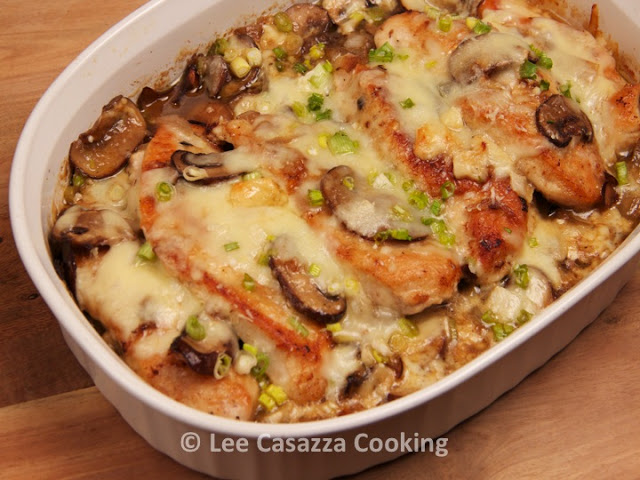 Posted by Lee Casazza at 6:27 AM No comments: 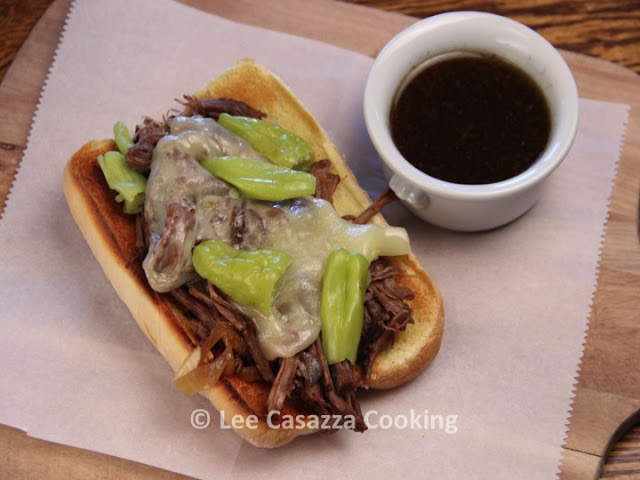 2 T avocado or olive oil, divided
2 large yellow onions, cut in half and sliced
3 ½ to 4 lb chuck or rump roast trimmed of excess fat
Sea salt and freshly ground black pepper
4 cups beef broth
1 T liquid beef bouillon concentrate
2 fresh rosemary sprigs
1 T fresh oregano sprigs or freeze-dried
4 cloves garlic, cut in half
Provolone cheese, sliced
Golden peperoncini in a jar with juice
Buttered and toasted Italian hoagie rolls
In a large Dutch oven or heavy pot, heat one tablespoon of the oil over medium heat and sauté the onions, for about 20 minutes until caramelized; stirring often.
Remove and set aside in a bowl and cover.
Season the roast on both sides with salt and pepper.
To the same pot, add the other tablespoon of oil and brown the roast on both sides.
When brown, add the beef broth, beef concentrate, rosemary, oregano, garlic, and juice from the ½ the jar of peperoncini.
Cover with a lid and bake in a 275 degree F oven for 6 hours.
Remove from oven and carefully transfer roast to a cutting board.
Cut away the string on the roast and let cool a few minutes.
While roast is cooling, pour the beef broth from the pot through a fine mesh strainer into a saucepan. Keep warm on the stove.
Using two forks, shred the beef completely and place in a medium saucepan and keep warm on the stove. Discard any fat still left on the roast.
To Assemble
Place a generous amount of shredded beef on the bottoms of the toasted rolls.
Add some of the caramelized onions.
Top with cheese and place under a broiler for just a couple of minutes; long enough to melt the cheese.
Top with a few peperoncini, trimmed of stems.
Serve with individual small bowls of the beef juice for dipping the sandwiches.
Serves 6 to 8
Posted by Lee Casazza at 7:52 AM No comments: